30.05.2018
Congratulations to the director of the Institute of Mathematics on the receiving the Order of Prince Yaroslav the Wise

19.12.2017
Meeting of the Academic Council of the Institute of Mathematics of NASU

29.11.2017
Meeting with the Mathematical Students of the Borys Grinchenko Kyiv University

22.11.2017
Memorandum of Understanding between Institute of Mathematics of the National Academy of Sciences of Ukraine and Kyrgyzstan-Turkish University of Manas

12.09.2017
Academic Council of the Institute of Mathematics

08.08.2016
The Institute of Mathematics of the NAS of Ukraine held a lecture of the world famous mathematician - Marina Viazovska

04.02.2015
The expanded meeting of the Editorial Board of the Journal "Nonlinear Oscillations"

23.12.2014
Сongratulate the members of department Complex analysis and potential theory!

14.12.2014
PRESIDENTIAL DECREE number 936/2014 UKRAINE On awarding annual prizes of the President of Ukraine for Young Scientists 2014

Special meeting devoted to 150th anniversary of world famous mathematician of Ukrainian origin Georgy Voronoï was held on April 23 at the Department of Physics and Mathematics of the Mykhailo Drahomanov National Pedagogical University. 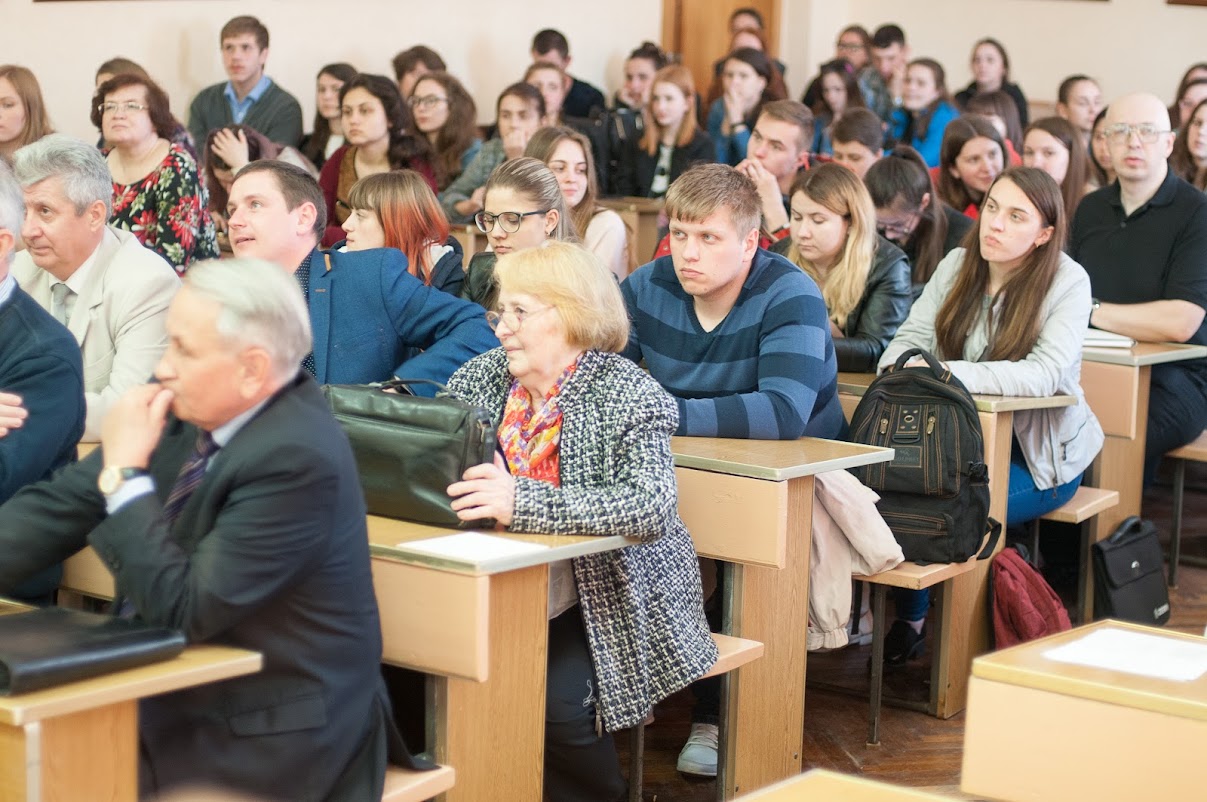 Researchers and post-graduates of the Institute of Mathematics of the NAS of Ukraine are also participated at this meeting. The film “Georgy Voronoï, Ukrainian and Polish Mathematician” (produced by Chernihiv Television and Radio Company in 2013, directed by Tetiana Myrhorodska) was demonstrated. Although screenplay contains some mistakes and inaccuracies, one can obtain information about life, research and teaching of the genius scientist.

Guests of the event spoke how they use Voronoïʼs results in their research work.

Academician Yaroslav Yatskiv, Director of the Main Astronomical Observatory of the NAS of Ukraine, and his co-workers Dr. Daria Dobrycheva and Dr. Iryna Vavilova spoke about mathematical methods to study large-scale structures and evolution of galaxies. Prof. Oleksandr Rud (Georgy Kurdyumov Institute for Metal Physics of the NAS of Ukraine) said how to use Voronoï polyhedral analysis for study of disordered systems.

Dr. Halyna Syta (Mykhailo Drahomanov National Pedagogical University) researched Georgy Voronoïʼs work and history of his family for many years. She recalled how a group of mathematicians from Kyiv visited Zhuravka in 1982 for the first time: they saw a grave of the scientist, and the house of Voronoï family existed at that time. She is also got acquainted with Georgyʼs daughter Maria Vorona‑Vasylenko, when Maria lived in Boryspil. Researcher cites Mariaʼs words, “In our family, we knew do not think about wealth (although we never were rich) and do not think about glory, but about glory of Ukraine”.

Prof. Massimo Capaccioli (University of Naples Federico II) is very impressed by this event. His student showed Voronoï mosaics to him, when Capaccioli was already a university professor. “But I did not know anything about Voronoï. Now I know that he is Ukrainian. So, I am happy to visit Ukraine even more,” Capaccioli said.

Many educational and memorial events devoted to the celebration of the 150th anniversary of Georgy Voronoï at the national level will be held during this week. Details are at the website: http://voronoi2018.npu.edu.ua/en/voronoi150